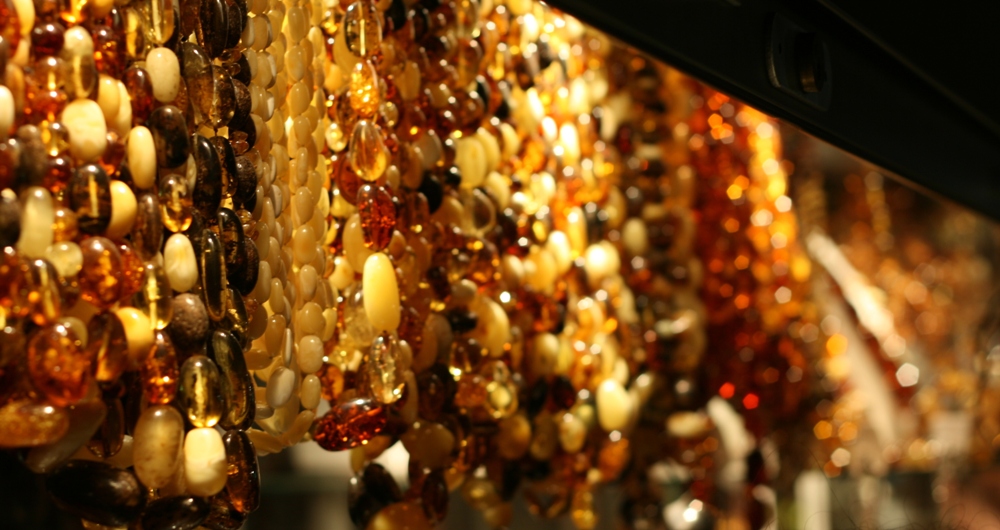 One of the most magnificent contributions of nature is the precious and rare substance known as Baltic Amber. With a myriad of colors and varying degrees of clarity, Baltic Amber is the crowning glory of artists, historians, jewelers, and discerning collectors all over the world.

Within the rainbow spectrum of natural Baltic Amber, you will observe various tints and shades from the palest yellow to various tints of yellow to white, blue, verdant green, honey beige, smoky brown and many different shades of each. In fact, there are 7 main colors and approximately 250 variations within that spectrum. Even more fascinating is the chameleon nature of Baltic Amber. Often there are two or more colors or patterns within the same pieces of Baltic Amber making it the most higly prized among collectors.

Baltic Amber can be totally transparent or entirely opaque. The primary material in Baltic Amber composition is ancient tree resin that is millions of years in age. Scientists actually date Baltic Amber to the pre-dinasaur era. Because the Baltic Amber resin traversed the earth from the base of the trees to nearby streams of water and ultimately to the Baltic Sea, the resin actually preserved organic tissue along its journey. To the amazement of scientists, pieces of plants and insects were captured within the Baltic Amber, creating a carbon footprint of living creatures existing in those ancient times, and needless to say, priceless in the information it provided in this revelation.

Transparent Baltic amber. Approximately 10% of amber is transparent. In ancient forest resin was flowing in a shady place; that is why turpens, the volatile components of resin evaporated slowly and did not make the resin turbid with gas bubbles, so the amber remained transparent. The shade of transparency could change from yellowish color to dark red color; it depends on the degree of Baltic amber oxidation. In clear amber, any insects, or whatever is trapped inside the stone can be easily seen.

Baltic amber in red shade is especially rare. Red amber was formed when the amber stayed in the air for a very long time. Oxidation process, heat of the sun, fire in the ancient forest. Natural oxidation takes place in the air and the amber interacts with oxygen and changes its color step by step. Transparent amber becomes red color. This is a very long process: change in the shades of color could be noticed only after 50-70 years.

Yellow amber is the most common color of amber. Resin was flowing from trees in the heat of the sun and the volatile components of resin evaporated and made them turbid - thousands of small gas bubbles were formed. These bubbles defract the light forming the yellow color. In one square millimeter of yellow Baltic amber could be 2500 gas bubbles 0.05-0.0025 mm. in diameter. The more bubbles, the lighter the shade of yellow.

White Baltic amber accounts for about two percent of the world's supply.Usually this amber is distinguished by its variety of textures and "natural ornamentation". The volatile materials of resins evaporated very intensively in the sun heat and resin obtained the form of foam. In one square millimeter of white amber there could be about 1 million micro-bubbles 0.001-0.0008 mm. in diameter.

In ancient times white amber was used to produce expensive medicine. They were used to treat heart ailments.

Blue Baltic amber is very rare, unusual andvery expensive. It is captivating to anyone who beholds it.Most frequently blue shade is found in white amber.Blue Baltic amber formed when resin floated by the rivers to the peninsula of Sambia and it got into soil saturated by pyrites (FeS2). Intrusions of pyrites got into small cracks of resin.

Greenish amber is also rare andvery popular and only accounts for about two percent of the amber found.Greenish amber color was formed, after resin fell on plants and reacted with pigment chlorophyll that could be found in plants. Because of the amber’s crystal structure, sometimes green amber is called "sugar" amber.

Black amber accounts for about fifteen percent of the amber found.  Resin was thoroughly mixed up with the remains of the bark and leaf litter mass.  Sometimes there could be only 10-15% of resin, and the other being impurities. Black color amber is fragile and softer and it is more difficult for amber artisans to work with it.

It is a magical gem.Whether you’re interested in enhancing your jewelry collection with exceptionally beautiful pieces, or owning natural healing remedy for almost any ailment, you’ll be impressed, no question about it!