There is always an ongoing dialogue from historians, scientists, and subject matter experts of the earth millions of years ago. Recently, we have seen some astonishing revelations of what our planet looked like before man. There is no doubt in any one’s mind that prehistoric conditions in the earth and the sea created the foundation of what we now see in our “global” perspective. 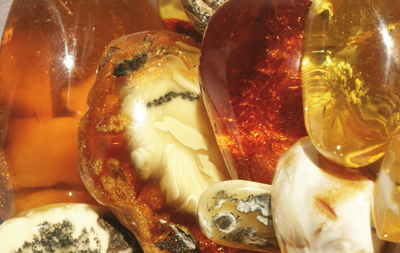 One of those amazing “finds” from time before man is an extremely rare substance called Baltic amber (succinite). Baltic amber was formed over 45 million years ago from the Resin of Conifer Trees in an ancient forest in what is now known as Eastern Europe in the region of the Baltic Sea.

As the resin traveled down the huge tree trunks and into the earth, it gathered remnants of the soil and plants and even tiny insects which were then transported in the substance into streams and eventually into the Sea. However, despite the various evolutions that Baltic amber experienced in its long journey, it remained a fossil and vulnerable to both oxidation as well as polymerization. In short, natural Baltic amber continues to evolve – and in this ability – it is a “living” substance.

As early as the 13th millennium BC, there is evidence of man’s interest in amber. The fascination has progressed from coveting Baltic amber as a most precious stone to wear, to craft various items including statues and enormous art works, and to – and this is most interesting of all – as a healer.

If we were to look at this from purely a historian’s perspective, we might consider that Baltic amber was a rarity that fascinated the viewer and became a treasure to own. If we consider Baltic amber from the scientist’s findings, we learn that not only is natural Baltic amber incredibly different from any other substance because it “carbon dates” the forms in nature at that time, but it has unparalleled Natural Healing Properties. When Baltic amber is in contact for periods of time against the skin, it actually increases the strength of the immune system, eases pain, and reduces stress.

Baltic amber contains 3-8% of Succinic Acid, a scientifically examined medical substance used in contemporary medicine. The highest content of the acid is found in the amber cortex - the external layer of the stone.

The largest (and probably the most famous) deposits of amber are found in the Baltic region. In fact, these deposits represent approximately 80% of the world’s known amber.

Amber is very light, its density is comparable to that of seawater and ranges from 0.96 to 1.096 g/cm 3. This is a key practical benefit, because it means that large Amber Jewelry, such as necklaces, pendants and bracelet, can be easily made and comfortably worn.

Raw Baltic amber comes in diverse forms drops, icicles, dripstones and nuggets of various sizes, which show how it was formed and how it travelled – each piece is totally unique.

Amber's value generally depends on the size of the nugget, but the decisive factor is the principle – known to amber jewelers who would haggle over the raw material ages ago – which says that “nuggets equal in weight do not have the same price, which depends on purity, clarity, rarity and refinement of colors ”

Amber nuggets are warmer than other stones and when rubbed, they attract bits of dry grass and paper, as amber becomes electrically charged. It charges negatively, which is beneficial for people.

Amber Colors: all varieties of cognac and golden yellow from opaque to transparent, ivory-colored, brown, green (moss), black (contains bark of trees or floor coverings of the forest); rare: blue and cherry (the reason of opaque color are up to 900 000 small bubbles per square millimeter – when the sun heated amber the surface of the stone became weak and oxygen could leave – this process is called natural clearing. Sun spangles are caused by different temperatures.

Amber changes mainly due to the impact of light. To begin with, its surface darkens and it gradually loses its luminosity and transparency. As the exposure time lengthens, the surface turns rough. The next stage is when fine cracks appear, alongside with scales which flake off even when moved only slightly, and then this layer is lost.

Amber is easy to work: it can be ground, cut to pieces, sculpted, engraved, made into intaglios and cameos.

So when you consider all the amazing facts about natural Baltic amber, it’s no surprise that it is one of the most desirable stones for natural jewelry. Hand crafted designs by amber artisans who treasure the precious ability of natural Baltic Amber are the most elegant presentation of amber’s natural beauty. From necklaces to bracelets to pendants in stunning color variations, natural Baltic Amber is timeless.

It’s also no surprise that natural Baltic amber is highly prized as the most effective homeopathic remedy for everything from treating arthritis to relieving teething pain in children.